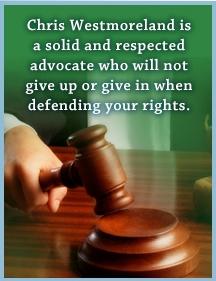 Choosing the right attorney to speak for you in a criminal court means finding someone you trust to be a competent and professional advocate before the judge, prosecutor and possibly a jury. Chris Westmoreland has the knowledge, ability, and reputation to effectively bring your defense and to make sure your rights are protected. His experience draws from years of courtroom litigation in criminal cases since beginning practice in criminal law. He has won numerous verdicts for his clients at trial and has achieved reduction and dismissal of criminal charges.

Chris has a natural presence in the courtroom, and has consistently demonstrated the ability to think and act quickly during trial and hearings. These traits, along with his command of language and the law, have won him the respect of judges and attorneys throughout his career. Whether your goal is to win a verdict at trial or negotiate for a reduced charge and sentence, Chris is ready to put his skills to work for you as your criminal defense attorney.

Area of practice includes all misdemeanor and felony charges including:

Chris is familiar with variety of options for achieving a more favorable outcome in criminal cases. As your criminal defense attorney he will explore these options including:

After being arrested, you will likely be released on your own recognizance (ROR) or by posting a bond. ROR is most desirable since no bond is required, but is unlikely for those who have failed to appear in court recently or repeatedly or who are currently on probation.

If you are required to post a bond you may be released by payment of the entire bond amount (paid in cash or money order) at the jail. When your case is completed, as long as you have appeared for all court hearings, the bond amount minus any unpaid court fees, costs, or fines will be returned (see Florida Statutes �903.286). Another way to make bond is to use a bondsman. They usually charge a fee equal to 10% of the bond amount in order to post the full bond. A bondsman typically will require collateral to cover the bond.

Sometimes the court will accept real estate as collateral for the amount of the bond. The procedure for this type of bond is much more complicated. To have the best chance for success, you should consult an attorney.

By law, your Advisory Hearing is held within 24 hours of your arrest and usually takes place in the jail. If you have not already been released from the jail on bond or ROR you will be brought to a designated area for the hearing. At the hearing, the Judge will make an initial determination of probable cause, inform you of the charges pending against you, inquire on your ability to hire an Attorney, and will consider your release on bond or ROR. Whatever the judge decides regarding your release or bond is not necessarily set in stone. Your Criminal Defense Attorney can file for a hearing later in order to request a modification of the advisory judge’s decision.

After you are released from jail notice of your arraignment will come in the mail – which brings up an important point: It is your responsibility to make sure the clerk of court has your correct address at all times. You cannot assume that changing your address with the postal service will be sufficient. Many people are arrested for failure to appear at Arraignment because the court notice went to the wrong address. If you received criminal traffic charges, the date on the ticket is the date for your Arraignment. You do have to appear in court on this date. However, most criminal defense attorneys file documents with the court before Arraignment that eliminate the need for the client to attend this hearing. Be sure to ask your attorney whether you must appear at Arraignment.

Arraignment is not the time to present evidence and have the outcome of the case decided. Witnesses and victims do not have to be present at arraignment for the case to proceed. Don’t speak with the prosecutor at arraignment. Realize that anything you say may be used to help them make a stronger case against you. If you are interested to know what their offer is, you can tell the judge that you wish to know and the prosecutor can announce their offer in your case in open court without you having to speak with them directly.

Arraignment hearings are generally limited to two activities: (1) The defendant is informed of the charges against him/her; (2) The defendant must enter a plea of Not Guilty, No Contest or Guilty to the charges. If the judge accepts a plea of No Contest or Guilty, the defendant is usually sentenced at that time. Pleading Not Guilty causes the case to be set for a Pretrial hearing. Most criminal defense attorneys will file a written plea of Not Guilty with the court in order to protect the client’s rights and secure the opportunity to investigate the case further.

Your defense attorney should file a Demand for Discovery that requires the state attorney to provide copies of reports, a list of witnesses, the results of scientific tests, and any video or audio recordings. Sometimes it takes what seems like a long time to complete the discovery process. A thorough review of the discovery by your attorney can often lead to new sources of evidence not originally included in the state attorney’s response. Discovery may also include the taking of depositions.

A deposition involves placing a witness under oath and asking them questions in the presence of attorneys for both sides and a court reporter. Depositions are frequently taken in felony cases, but are only permitted under certain circumstances in misdemeanor cases. Any defendant wishing to depose a witness must pay for the services of the court reporter and may be liable for travel expenses incurred by the witness. The state attorney cannot take your deposition unless you waive your right to remain silent – which you would never do! They can take the deposition of any witness listed by your defense. You do not have the right to be present at any deposition unless the judge allows it.

Once Discovery is complete, it is crucial for your criminal defense attorney to review all of the material with you. Your attorney should discuss with you the potential for keeping certain evidence out of your case. Some evidence may not be admissible at a trial by virtue of clear-cut legal principles. Your attorney may have to file and argue motions to exclude other evidence harmful to your case.

The first Pretrial hearing takes place several weeks after the Arraignment. At a Pretrial, the judge must be informed whether your attorney and the state have reached an agreement on how to dispose of the case. If you have agreed to a change of plea (from Not Guilty to No Contest or Guilty) the judge will likely accept your plea and impose a sentence. If no agreement is in place either side may request another Pretrial date be set, or the case may be set for trial. Judges have different practices regarding how many Pretrial hearings may take place before a case is set for trial. Some cases may require more than others, given the amount and availability of evidence relevant to the case and how the Discovery process is progressing.

You can only make a fully-informed decision on whether or not to take your case to trial after a comprehensive assessment of the evidence expected to enter your case with your attorney. You are entitled to a jury trial for most criminal charges, but not for a violation of probation. Here is a brief explanation of each stage of a jury trial:

Voir Dire – This is the process used to select the jurors that will decide the guilt or innocence of the accused. After questioning a larger group of prospective jurors, the defense and the state attorney have opportunities to exclude individuals, leaving a smaller group as the jury of the case.

Opening Statement – This is the time for each lawyer to tell the jury what they expect the evidence to show. The state attorney gets to go first, followed by a statement from your attorney.

State’s Case – The state attorney presents evidence in an effort to show that you are guilty of the crime charged. Each witness questioned by the state during this stage will have to answer questions from your attorney immediately after.

Defense Motions – At the close of the state’s case every defense attorney should make a motion to have the charges dismissed based on a lack of the evidence. The state must have made a prima facie showing of each essential element of a charged crime for the case to proceed to the next stage.

Defense Evidence – The defendant has the chance to present evidence and testimony to the jury. The state attorney gets to question any witness presented by the defense including the defendant if he/she testified.

Closing Argument – Each side makes arguments about what the evidence showed and how the law applies to the evidence presented. The state attorney has the right to present two closing arguments to the jury; one before and one after counsel for the defendant.

Jury Instructions – The judge instructs the jury on the law that applies to the case. Attorneys on either side may propose instructions to be included by the judge.

Sentencing – If the verdict is Guilty, the judge may pronounce a sentence right away. The defense can request that sentencing be set off to another day, in order to prepare a presentation of information that they believe the judge should consider before deciding on a penalty.

Most criminal cases are resolved through negotiation and an agreement with the state attorney. Sometimes an agreement is reached on the day of trial. Judges are not bound by any bargain with the prosecution, but they accept them a vast majority of the time.

Chris Westmoreland is ready to be your criminal defense attorney. He is a solid and respected advocate who will not give up or give in when it comes to defending your rights. Contact us now to set up a private consultation with him free of charge, and discuss your case with a proven criminal trial lawyer. 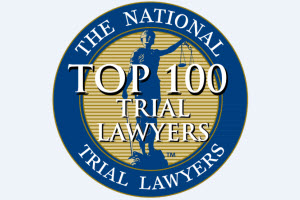 Chris Westmoreland is a criminal attorney serving the Tampa Bay area, including Pinellas, Hillsboro and Pasco counties. He has handled thousands of criminal … END_OF_DOCUMENT_TOKEN_TO_BE_REPLACED 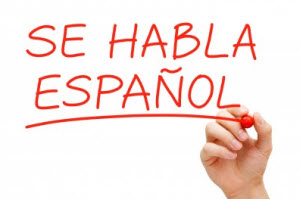 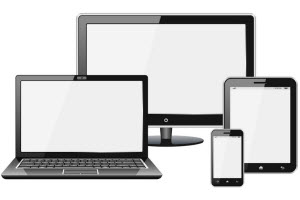 Welcome to the website for The Westmoreland Law Firm. Our site is a mobile responsive design that allows viewing the site across PCs, laptop, tablets, and … END_OF_DOCUMENT_TOKEN_TO_BE_REPLACED